Or, how to ensure that you are thoroughly searched by the TSA. 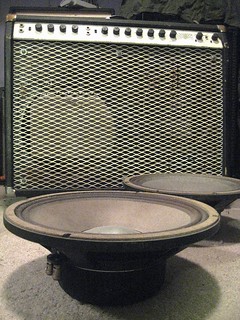 I recently traveled to Boston for an outrageously large shindig celebrating my mom’s 80th.  We have a huge extended family there, mostly around Malden and Everett.  I stayed with my cousin Allison and her husband Gary.  I got to blathering to Gary about my amp hobby, and offered me Gary Jr’s old amp since no one was using it and it was just sitting out on the porch.   I was intrigued and immediately wanted it, though I had my doubts about getting it home on the plane.

The amp comes by its nickname honestly.  The faceplate has been painted white, and a cheap aluminum grille added, also painted white.  From the front you can’t tell what it is.  The back was not sprayed white however, so you can tell it’s a Lab Series L5 amp, 100 watts, supposedly one of the best sounding solid state amps ever made.  Apparently Clapton had one, as did B.B. King.  The L5 was a clean amp, preferred by blues and jazz players.  I wasn’t interested in restoring it (it was pretty far gone anyway) but the chassis and cabinet looked in decent shape, and it came with two JBL K120 speakers, probably still in working condition. 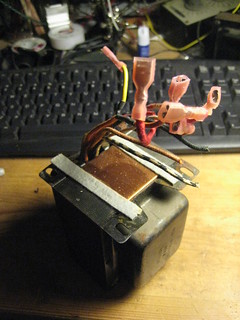 But again, how to get it home?  It weighed at least 80 lbs. and was way too big to even think about carrying on the plane.  I consulted the United website.  As a Frequent Rewards program flier, I was entitled to check one piece of luggage, up to 50 lbs.  Any heavier and it would cost $100 to check it.  I decided the thing to do was remove some of the heavy bits and ship them.  Gary offered to take care of shipping the speakers; he has the advantage of working for a major shipping company.  We didn’t have a scale, and the thing still seemed fairly heavy after removing the speakers, so I removed the power transformer and put it in my backpack.

Off to Logan the next day.  The skycap didn’t look twice at the derelict amp carcass I was checking through to San Francisco.  I tipped him $3.  The TSA screening was a different story.  They spied the suspicious device on their monitor and took me right over to an inspection station.  The TSA officer asked if there was anything sharp in my backpack.

I said, “well, the transformer you’re looking for has some rusty sheet metal bits, but it’s not particularly sharp.”

She found the tranny and pulled it out, gave a cursory look through the rest of my bag.  Then I got to watch her use what I assume was an electronic nose—a small wand with a disc on the end, which she rubbed all over my suspicious item.   Probably it would have squealed if it smelled any ammonium nitrate or saltpeter.  It kept quiet, so she took my bag and transformer for a second ride through the x-ray machine.  As she did I saw her point at the transformer and ask her supervisor something, probably “is this a transformer?”  He nodded.  I was soon on my way.

And here the speakers are, a couple weeks later, reunited with their cab.  Gary did an amazing packing job, I wish I’d taken a picture before unboxing.  The baggage handlers probably could have dropped the box from the cargo hold to the tarmac and the speakers would have been fine.

I have big plans for this one.  Mum’s the word for now as ideas continue to congeal in my brain, but it’s gonna be cool, and it’ll look nothing like it does now when I’m done.